Well, much to my dismay I’ve wasted almost an entire day on my website……and I didn’t get much accomplished. It’s funny that you sign up for a website….pay a lot of money…..and yet, you are still expected to do the majority of content addition. I’ve about had it with the new website conversion for Cowgirl Swank…..I was seriously thinking about starting on some wine at 11:30 this morning! But…..I didn’t……not that it would have mattered…I’m working from home today. Well, it may have mattered….I may be in bed right now…for the night! 🙂

I couldn’t indulge in wine while trying to avoid my website anguish….I needed to spend some quality time with my son, try to makes heads or tails of the content I need to add, write a few articles for some new projects I’m working on, clean a bit, and do Dance Party 3 with Stone. All of that is done so now I can sit down and enjoy. I really do love to blog. It’s kind of like therapy for me. I don’t have to worry too much about punctuation…..(don’t you just love my excessive dots?)…….I do!! 🙂

Anyway, enough about my website nightmare today. On to something more fun…..Chicken Scampi! Have you ever eaten at Olive Garden? Chances are you have….it’s truly one of our favorite places to eat. Just give me pasta and bread sticks and I’m happy as a clam….so is Shane…..so is Stone. Well, Shane needs to add meat to his because……he’s a carnivore, I swear! 🙂 Anyway, Olive Garden has to most awesome Chicken Scampi ever. This recipe was inspired by their dish. I have made it time and time again until I got it just right. I’ve had several errors and mishaps along the way, but this is the final recipe that I’ve come up with. It is a bit time consuming concerning preparing the chicken, but I can honestly tell you that it is worth the effort!

Place flour, salt, pepper, and seasonings (about ½ tsp. each) into a shallow dish and mix well with a fork. Place milk in a shallow dish. Beat in an egg. Dredge chicken first in flour, then dip into milk, and then dredge again in the flour. Place breaded chicken on a rack and allow to rest 10 minutes before cooking. While the chicken is resting, cut peppers, onions, and mince garlic. *I actually made the chicken the night before so I don’t have pictures. Sorry! I may try to add some at a later date if I can remember.*

Saute peppers, onions, and garlic in a large deep skillet over medium heat with a couple tablespoons of olive oil. 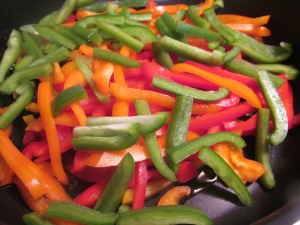 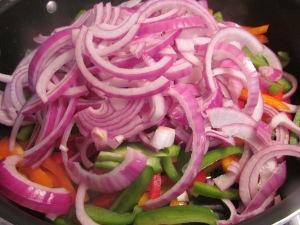 Season peppers, onions, and garlic with a little bit of salt and pepper. Saute until peppers begin to brown. Remove from skillet.

Add another couple tablespoons of olive oil in hot skillet. Place chicken in skillet. Cook for 5 to 7 minutes on each side until the chicken has browned on both sides. Remove chicken from pan. Deglaze the pan by adding white wine to the pan and add more ½ tsp of each seasoning (Oregano, Cilantro, Italian Seasoning). Scrape the bottom with a spoon scraping the browned bits off the bottom of the pan. Add heavy cream and mix well. Return cooked vegetables to the pan and stir. Add cooked pasta to the skillet.

Add more salt, pepper, and seasonings to taste if you like. Plate the pasta and sauce, placing a few pieces of cooked chicken with each plate.

I wasn’t very “on the ball” about taking pictures this time around. I will do better next time. I actually didn’t plan to make this until later on in the week, but sometimes certain things sound good….and that’s what happened! Like I said, I made the chicken the night before which I’ve never done before. The result? Still delicious! Give this one a try….it’s a keeper! ~Cheyenne

The past few months I have been slowly playing with a totally new website for Cowgirl Swank.  It was a hard decision to make…..starting from scratch, but after 7 years of our current website I decided it was time to update and go state-of-the-art. It has been quite a process….I had to completely shut down doing it during the holidays, but now I’m full-steam ahead at getting it launched. I’m happy to announce that the new site will go “live” on Valentine’s Day! ❤

It’s a great day to show our love of new fresh things…..and to share some “Cowgirl Swank” with our fans. We will be giving away some fun things so stay turned to our Facebook page and our new website at www.CowgirlSwank.com.

Speaking of Valentine’s Day…..who else out there loves this day? I’m funny this way…..I love any reason to show those I care about how much I love them….whether it be through food or a small token of my affection/appreciation. Since I love to cook…..these two things sometimes become the same. 🙂 This leads me to Cherry Turnovers (Cheyenne’s Version). Super easy to make (depending on the method you follow) and yummy! Plus, the filling is red, which is totally Valentine’s Day…..it works for me! Here’s how you can make them:

On a cookie sheet or pizza pan, put down some parchment paper. Roll out one pie crust (normal size). Using a pizza cutter, cut the pie crust into 4 equal slices (like a pizza). 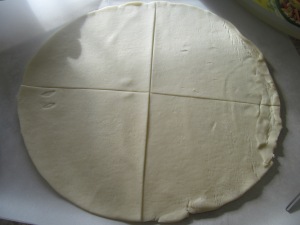 Add several tablespoons of the cherry pie filling to the center of each of the 4 pieces.

Then, fold them over and press the seams. I dip my finger in water to help create a better seal. Don’t worry if a little of the filling squeezes out. 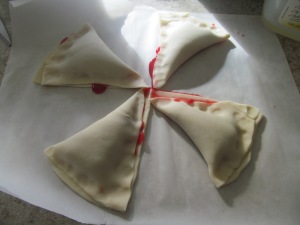 Repeat these steps for the other pie crust. You will end up with 8 turnovers total. After they are all sealed, take a basting brush and coat with the egg wash. Sprinkle sugar on the turnovers. 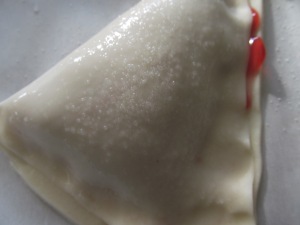 Bake at 350 degrees for around 15 minutes. Every oven varies so I would definitely watch these…..nothing worse than burned pastry! When finished, this is what they should look like:

Place all 8 turnovers on a wire rack to cool. I leave them on the parchment paper as it helps to catch the frosting (less mess). You can now mix up your frosting. I use 2 cups of powdered sugar (give or take) and a few tablespoons of milk (give or take). 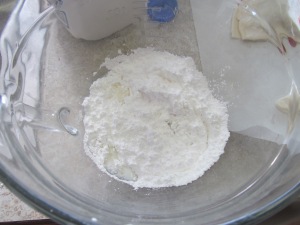 I mix this up until it reaches the desired consistency I am looking for (thicker is better as it will run like crazy if it is too thin). I then add a tsp or too of almond flavoring (you can use vanilla also, but I love the taste of almond with cherry).

This was my first attempt and it was too runny…..so I added more powdered sugar until it was just right. Once you get it where you want it, drizzle it over the cooled turnovers. Let them sit a bit to allow the frosting to set. 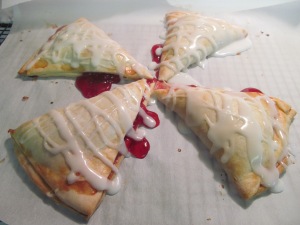 Talk about a major hit with my family! My little boy is quite the picky eater, but he absolutely loved these! Think Pillsbury Turnovers times 1,000!! It really doesn’t matter how homemade you want to get…..making your own pie crust….making your own cherry filling…..these taste just as great with ready to use ingredients (and no one will be the wiser….unless you tell them, of course)! Give these a try……these are worth it! 🙂 ~Cheyenne