It’s finally here…..the Black Hills Stock Show Stray Gathering!! I’ve talked about Stray Gathering in a previous post and just typing it makes me giddy! I’m absolutely thrilled that they have added a permanent “All Girl” portion to it reserved for the fairer sex. There are 10 teams of 4 gals competing tonight and yours truly is on 2 of those teams…..EXCITED doesn’t even describe it! I’ve been exercising my horse…..and practicing in anticipation for this great event! My husband and some of his buddies are entered too. I’m hoping to blog again tomorrow about all the happenings so stay tuned!!

Me….happy to be practicing in an indoor arena with my best horse, Doc. Color me glamorous….Life is good! 🙂 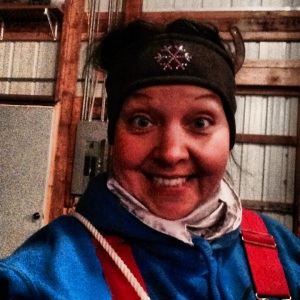 In preparation of tonight, I decided to make Shane’s favorite breakfast food for brunch. He’s been getting up early to go feed so it makes more sense to have breakfast around 10 o’clock when he is in between bunches of cattle. I surprised him with French Toast and Bacon……surely this will fuel us for some success tonight….if not, it’s yummy no matter what! There are a million recipes for French Toast out in the world. I stumbled upon the recipe that I made my own about 15 years ago and I’ve used it ever since. When I say that I made it my own I mean that I tried the original recipe, but toyed with it until I got it just like I want it (thus, totally redoing it)…..I do this a lot with recipes…..and life in general! 🙂

Mix all ingredients in a bowl with a whisk (leaving the milk till last).

I mix everything up then add the milk as it seems to mix up better.

Slice up a loaf of French Bread or Cinnamon Swirl Bread and dip it into batter (both sides). 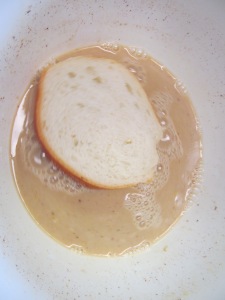 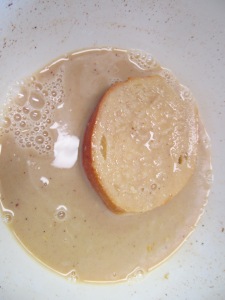 Cook on preheated griddle until brown on both sides.

Sprinkle with Powdered Sugar. Add butter and syrup then devour it! 🙂

I usually always serve a breakfast meat of some kind (you know….Shane HAS TO HAVE meat at every meal). Today, it was bacon. Who doesn’t love bacon?! There are various cooking methods (we love to grill it on our Traeger), but today I baked it. I put the slices on a jelly roll pan. Keep in mind that there will be a lot of grease….I blot each piece of bacon to get rid of any excess…..see why…..

That looks like a grease swimming pool….heart attack city!! Blotting is necessary for sure! What you choose to do with the excess grease is up to you. I usually fill an empty old pickle jar and discard it. Some gals feed it to their dogs……some older ranch gals reuse it (back when that’s what they did with most everything). Like I said….it’s up to you! No judgment here! 🙂

Well, it’s about time to go load up the trailer and head north. Mother Nature isn’t cooperating as it’s cold, windy, and it’s starting to snow a tiny bit. Why do I feel like she is always trying to ruin my plans? Maybe it’s not just me who feels this way? Who knows…..I’m bound and determined to go……here’s to a fun event with lots of great folks! Time to go gather those strays……YeeHaw (can’t believe I just typed that)……haha! ~Cheyenne